Injured in a motorcycle accident in Chicago, IL? Chances are the accident wasn’t your fault and that we can help.

Most people have an opinion of motorcyclists as leather-clad bikers who veer in and out of traffic or travel at high rates of speed and expect to see such risky behavior from drivers they may see as questionable.

In truth, however, in the case of a motorcycle incident between a motorcycle and another vehicle, it is the drivers of cars or trucks who are more likely to be at fault.

Motorcycle riders are at a much higher risk of injury, given their size compared to that of even a small car. Many motorcycle riders suffer catastrophic injuries including fractures, brain bleeds, and even worse, death.

There are certain situations where crashes are more likely, and being aware can keep motorcyclists safer. We’ve compiled some of the most common reasons why motorcycle accidents occur, giving riders insight into what other drivers might be about to do that could put their life at risk.

Some frequent causes for motorcycle accidents involving another vehicle include:

Motorcycle Drivers in Chicago Must Be More Proactive to Protect Themselves 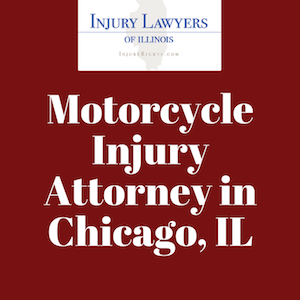 It is risky riding a motorcycle, especially in the windy city of Chicago where lots of traffic and distractions cause accidents.

Based on estimates from the federal government in 2010, motorcycle deaths are 30 times more likely than vehicle deaths based on miles traveled.

Head injuries are most commonly associated with motorcycle accidents, but about 37 percent of motorcycle deaths and 67 percent of brain injuries could be prevented by wearing a helmet.

In order to not be part of that sobering number, motorcyclists must be proactive about their own safety, doing what they can to stay safe on the road, no matter who else is sharing it.

Still, despite any safety precautions you may take, you are still at risk of an accident & injury since other drivers are usually at fault.

In Illinois, more than 3,000 motorcycle accidents resulting in injury occur each year. Most of them are in urban areas such as Chicago, where traffic travels at a high rate of speed, putting more vulnerable riders at a higher risk of injury, and cars may not see a smaller motorcycle.

If you have been involved in a motorcycle accident, it’s likely you have injuries.

If your motorcycle accident was someone else’s fault, having the right attorney can help you get the compensation you will need to cover medical expenses to cover those injuries, as well as lost wages and pain and suffering.

If you were injured in a motorcycle, call our firm today. Your first consultation is free, and you pay nothing until we win your case.