According to statistics, a CTA (Chicago Transit Authority) bus crash occurs every 36 hours.

While all don’t result in injuries, the outcomes of those that do have the potential to be catastrophic.

6 Things to Consider When Injured in a CTA Bus Crash

If you are injured in a CTA bus accident, there are some steps you should take in order to protect yourself, especially if those injuries are serious. 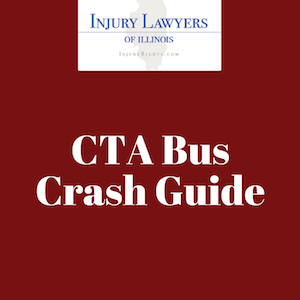 Chicago is a busy city, with traffic congestion and some of the most treacherous intersections in the country. Add to that winter weather, which can include snow, sleet and ice made more dangerous thanks to the wind coming off of Lake Michigan, and it should come as no surprise that there is a CTA accident every day and a half.

In addition to winter weather, some common causes of accidents with injuries include:

What Are Some Top CTA Bus Crash Injury Settlements?

The family of a woman who was struck and killed by a car, then hit again by a CTA bus, was awarded $4.3 million in a settlement that was negotiated with the CTA.

The CTA settled with a woman whose feet were run over by a CTA bus, resulting in permanent disability, $6 million after the case was settled following mediation.

A 28-year-old factory worker was awarded $11 million from the CTA after the car he was riding in was hit by a CTA bus driver, leaving him with a severe head injury and the mental capacity of a child.

What Can Hurt My CTA Bus Crash Case?

The CTA rarely, if ever, settles a case when an injured party makes a claim.

Instead, they gather detailed information from you through requested paperwork in an effort to learn more about you, and gain evidence that may implicate you and expnorate them.

They may also use witness statements and your own recorded statement to discredit your case.

In addition to talking to the CTA, failing to file paperwork on time can also hurt your case.

Talking to a lawyer – and not the CTA – may be a more effective way to bolster your case.

The right attorney can help negotiate your claim successfully with the CTA, and should work hard to make sure that you are fairly compensated for your injuries and any damages.

How Long Do I Have to File a Lawsuit for My CTA Bus Injury?

Because the CTA is a government agency, the statute of limitations is short.

It’s important to act fast if you were injured and plan to file a lawsuit because any evidence should be gathered as soon as possible.

Filing a personal injury report with the CTA as quickly as possible may be the smartest move you can make.

What Are the Most Common CTA Bus Injuries?

When winter weather envelops Chicago, icy conditions can be problematic, especially for busy commuters who get on and off the bus, creating a slushy mess at the bus entrance or exit that can cause slip and fall injuries.

Falls can lead to sprains, broken bones or head injuries.

In 2015, a 51-year-old woman was killed when she was struck and dragged beneath a CTA bus that also hit several vehicles.

Eight others, including the bus driver, were injured in the accident, which occurred during a Tuesday evening rush hour.

“It hit the curb and went up on the curb and slammed into a concrete wall,” a witness told Chicago’s NBC television affiliate. “People were screaming and running. The bus driver was hurt. The windshield of the bus was out.”

If you’ve been injured in a Chicago CTA bus accident, call our experienced team of attorneys today. We are ready to take your case to trial if necessary, and you won’t pay a fee unless we win your case. Your initial consultation is free.