In 2015, a woman was killed and eight others were injured when a Chicago Transit Authority bus jumped a curb during rush hour on Chicago’s busy Michigan Avenue, creating a horrific scene of chaos and carnage when the dead woman was pinned beneath the bus. 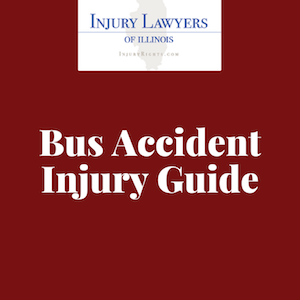 Not only was the incident life-altering for those injured, but witnesses and bystanders were also traumatized when they ran to assist the woman, only to discover that she was already dead.

According to estimates, there is one crash every 36 minutes involving a CTA bus, and in 2014 alone, almost 500 people were injured in those crashes.

Still, those numbers are low compared to general traffic accidents, according to a CTA representative.

“CTA buses are extremely safe,” Brian Steele, vice president of communications and marketing at the CTA, told Chicago’s WLS-TV. “Everyday people are taking CTA bus trips and the overwhelming majority of those trips are without incident and when you look at the crashes compared to the amount of miles that we travel, the number really is low.”

The CTA is the second largest public transportation system in the nation, and on an average weekday, it accommodates approximately 1.64 million riders.

Most of the crashes that do occur are caused not by CTA drivers, but by other drivers instead, the CTA says.

“We have a lot of incidents in which vehicles rear-end buses, turn in front of buses, sideswipe them, so only a small percentage is really the result of actions by CTA bus drivers,” said Steele.

For example, a 2017 accident that left four dead and twice as many injured occurred when a car hit a CTA bus head-on after losing control while speeding, hitting first a parked car, then the bus. All four of those killed were in the car, authorities said.

Bus accidents can occur for a wide range of reasons. Drivers become ill and lose consciousness, drivers spend too much time on the road and become a road hazard, other drivers fail to understand that buses have blind spots and may not see them from certain angles, buses will swerve to avoid deer or other road hazards.

The leading causes of bus accidents, according to experts, include:

In 2014, a CTA shuttle bus slammed into a concrete barrier near Chicago’s busy O’Hare International Airport, sending 15 to the hospital, some with serious injuries.

“People were thrown around the bus,” Chicago Fire Chief Timothy Sampey said in a press conference. “Some were more critical than others.”

The bus driver, who was later cited for failing to produce a drivers’ license and failure to stay in the appropriate lane, was pinned in the crash and rescued by a firefighter who was on his way to work and was just two cars behind the bus when it crashed.

Have You Been Injured in a Bus Accident?

If you have been injured in a bus accident, especially so a Chicago Transit Authority bus, you will need an experienced attorney who will be able to fight the team of lawyers CTA and other large companies put in place in an effort to intimidate claimants into keeping claims low.

Fortunately for passengers, however, buses can offer evidence after a crash.

CTA buses usually carry black boxes that record speed and other valuable data in case of a crash. A good attorney will know to acquire the information on that box before it is destroyed. That said, because evidence like black box data can be easily lost, it’s important to act quickly if you are injured in a bus accident and believe that the bus driver was at fault in order to preserve that evidence and bolster your case.

If you were in a bus accident, call us today. You won’t pay a thing unless we win your case, and your consultation is completely free.